The Hourglass & French Music Before And After The Great War

The Hourglass – A musical voyage through the Jewish soul
Driven by Virginie Constant, talented cellist, supported by Simon Zaoui on the piano and Katarzyna Alemany on the cello, this disc gathers works written in the first half of the 20th century by composers in search of a Jewish musical identity, be it Ernest Bloch, Lazare Saminsky or Joseph Achron. Like the hourglass in which runs the Time of History, and where we would be the grains of sand, this disc has the ambition of making us travel … Learn more
Order the CD 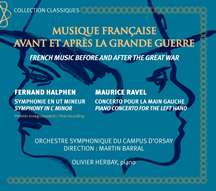 French Music Before And After The Great War
The First World War marked a deep turmoil in Europe, from which the musical creation wasn’t forgotten. Performed by the Orchestra of the Campus of Orsay, under the direction of Martin Barral, and the pianist Olivier Herbay, the works gathered in this disc illustrate this statement : Fernand Halphen’s (1872-1917) symphony in C minor still belongs to the XIXth century, where as Maurice Ravel’s (1875-1937) piano Concerto for the Left Hand, firmly turned towards modernity,.. Learn more
Order the CD

The EIJM ON THE GERMAN NATIONAL RADIO “DEUTSCHLANDFUNK KULTUR”

Upon the recent passing of her mother, Lenka discovered two tattered notebooks of hand-written poetry that her grandmother, Anna Hana…
Read more

All rights reserved to the European Institute of Jewish Music